Canadian classic roots and blues rock band “The Commoners” release Too Much, the second single from the forthcoming album Find A Better Way on Friday August 26th.
The single is available to buy and stream from https://lnk.fu.ga/thecommoners_toomuch.

Too Much - The Commoners (Official Music Video) #rootsrock

The album is released on CD, limited edition vinyl and digital by Gypsy Soul Records on Friday 4th November and is available to pre-order from thecommoners.ca, and pre-save from https://lnk.to/TheCommonersFABW.

The band describe the Too Much single as follows – “Erupting with the growling vigour of an old Beaumont, Too Much drives The Commoners to the brink of surrendering their dreams for the comforts of home. A high horsepower performance peels out with rowdy riffs and lively organ in tow, delivering a relatable sentiment that never proves to be too much.”

Possessing a sound tapped from the oaken belly of a whiskey barrel, The Commoners are a four-piece Roots/Rock outfit from Toronto, Canada.

Described as “a classic rock and roll affair,” the nine songs take the listener on a sonic voyage through the lives of the band, from the 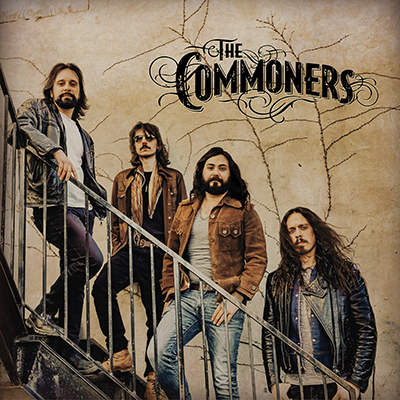 dusty back roads of rural Ontario to the bright lights of the big city. Offering their own blend of rock and roll, southern blues, and roots music, the Toronto-based four-piece band are known for their high-energy riffs, soulful vocals, and rich harmonies. The result is an authentic Southern-style rock experience.

The group was cobbled together over the course of a decade, adapting through numerous obstacles to form the unit as it exists today: Chris Medhurst (vocals/guitar), Ben Spiller (bass), Ross Hayes Citrullo (lead guitar), and Adam Cannon (drums). Often joined by their friend, organist Miles Evans-Branagh, The Commoners unite under a shared dream: to write, perform, and share music that is an authentic nod to the greats who paved the way before them.

“The new album authentically embodies the rock and roll, soul, and blues rock experience,” says the band’s lead singer, Chris Medhurst. “That’s something we really wanted to bring back. That’s the roots. That’s what we listen to.”

The Black Crowes are a considerable influence for us,” says Medhurst. “Derek Trucks, Marcus King, Led Zeppelin, and The Allman Brothers Band, too. These are the bands that we wear on our sleeves as we aspire to create our own music and sound.”

Find A Better Way is an album that demands attention from the first note. The opening lines “If I scream at the top of my lungs, and stamp my feet, ’til the floor comes undone,” immediately inform that a wild ride lies ahead. The album was recorded and produced at RHC Music in Toronto by the band’s guitarist Ross Hayes Citrullo. Ross collaborated with executive producer Renan Yildizdogan to strike the perfect balance of new and old recording treatments. The goal was to create something that felt new and original, yet still familiar to their target classic roots rock and blues rock audience.

“The vision from the beginning was to marry old and new southern rock together in a way that was unique to the band’s Canadian roots,” explains Citrullo. “By adding the soul and rock elements of the Black Crowes, and the southern blues rock undertones of the Allman Brothers to a production style akin to Blackberry Smoke and Rival Sons, I think we developed an authentic sound that compares sonically to some of our favourite records across all of those music genres.”

The album’s lyrical themes drill into the essence of humanity: love, regret, ambition, and fear. Circling the forever challenge of doubt vs. desire, The Commoners place themselves into the shoes of the everyman. The result? Nine tracks that function as a comfort and companion through all of life’s trials and tribulations, with melodic solos, soaring organ, and a punchy rhythm section to drive the messages home. 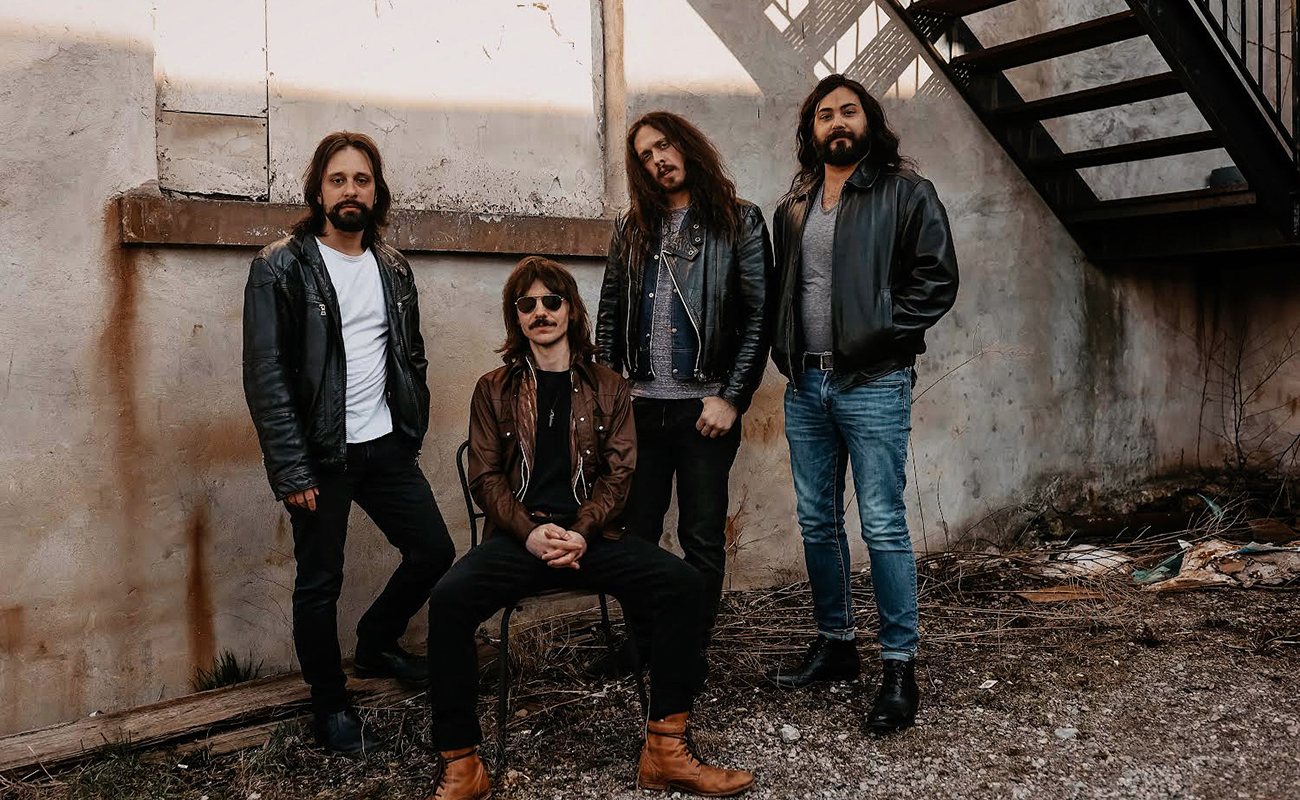 Drummer Adam Cannon says, “Music, like so much in life, is about the exchange of energy,” and The Commoners make more than a fair trade. Striving to present an impactful, memorable, and downright exhilarating live experience that accurately represents their recorded works, the band carries the listener over spirited choruses and group chants, before returning them back to earth in need of a shot of something smooth. You can expect to leave fully satisfied, sweat drenched, and heart racing, a good time guaranteed—just what we all need.

The Commoners enlisted a handful of Toronto’s finest musicians to help bring their record to life. On the title track Find A Better Way, the band brought on keyboardist Jeff Heisholt (The Trews) to lay down an iconic organ track. For the rest of the album, keyboardist Miles Evans-Branagh performed organ, piano, and Rhodes.

To accompany Ben and Adam on backup vocals, The Commoners called upon three of Canada’s top backup singers. Tash Lorayne and Shezelle Weekes (The Arkells), and Chantal Williams joined in to arrange vocal parts and enliven the mix with their vivacious voices resulting in a spine-tingling performance.

The Commoners also invited local legend Michael Eckert to lend his pedal steel talents on I Won’t and Alive. Adding the final cherry on top, renowned multi-instrumentalist Ben Healey treated Deadlines to a guitar solo worthy of the world’s greatest stadiums. Though these songs were all written by The Commoners, the contributions of these amazing guest musicians make the album something special.

“Every time we brought an outside player into the studio, they would offer their own unique instincts and interpretations of each song. This helped the album grow into a collaborative art piece that continues to surprise us with every listen.”

A rock anthem to its core, the title track, Find A Better Way, carries a message that encapsulates the entirety of the record. With growing 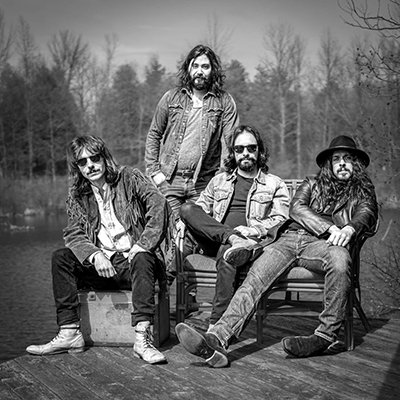 uncertainties, society faces challenges previously unseen, leaving the collective in a perpetual state of questioning, with doubt directed towards governments, public leaders, and our neighbours. From the aftermath of COVID-19, the increasing mental health crisis in North America, war crimes in Ukraine, and the explosion of social movements & protests, one thought unites us all—we need to find a better way to co-exist on this planet. Find A Better Way takes an inward look at confronting our tumultuous past and accepting personal accountabilities to uncover the strength needed to seek a solution.

Find a Better Way is the only track on the record to mixed outside of Canada. The band worked with legend Producer/Mixer Kevin Shirley (the Black Crowes, Joe Bonamassa, Led Zeppelin) at Caveman Studios in Sydney, Australia. Kevin’s mix helped set the perfect tone for the album, which Ross Hayes Citrullo was then able to follow for the rest of the record. Kevin’s involvement set The Commoners on the right path with this epic title track.

Mastering was also an important consideration for the band and their label. For this stage, the team sent their record all the way to Nashville, Tennessee to Pete Lyman (Tedeschi Trucks, Blackberry Smoke, Chris Stapleton, Rival Sons) at Infrasonic Sound. Pete’s specialty for mastering southern rock made the mixes come alive, making them sonically competitive to the band’s influences.

As a collective, we find ourselves emerging into a changed society, with uncertainty looming and shadowing the future. In their upcoming release, The Commoners remind us that music has a unique ability to heal, a medicine of extraordinary merit, and balm for the soul during dark times. Every major movement in history gave rise to change makers, and The Commoners are taking their stand, here to lead and inspire us all to Find a Better Way.

FIND A BETTER WAY
Two words. Rock Anthem. A rip-roaring intro launches the band into an epic, empowering song with a resonant message. The cry to confront our tumultuous past and accept personal accountabilities has never sounded better. Gang vocals urging “Don’t walk away from me,” and a biting guitar tone immediately grab the listener, refusing to let go until they heed the call to find a better way.

FILL MY CUP
A roots rock classic with introspective verses and a chorus that will promptly raise hairs, Fill My Cup is the album’s spirited first single. Made for sun-filled Saturday afternoons, high-energy riffs, and emotive vocals elevate this track to higher ground. Featuring the talented Chantal Williams on backup vocals, Fill My Cup strikes hard with a message that screams through the speakers. One listen and you’ll be saying, “How ‘bout another round?”

MORE THAN MISTAKES
The rock train rolls on full steam ahead with the punchy and rollicking More Than Mistakes. Bright tambourine accents a rhythm section to rival Motown, illuminating a track that will instantly push listeners to the edge of their seats, raising them to their feet. Alive and free, More Than Mistakes affirms the album’s theme of self-empowerment with gusto.

TOO MUCH
Erupting with the growling vigor of an old Beaumont, Too Much drives The Commoners to the brink of surrendering their dreams for the comforts of home. A high horsepower performance peels out with rowdy riffs and lively organ in tow, delivering a relatable sentiment that never proves to be too much.

NATURALLY
Swelling with vulnerability, and hard truths, Naturally confirms that honesty writes one hell of a song. A sparse intro pours into a symphony of voices, wrapping the listener like a pair of welcoming arms for a chorus that hits like an arrow through the heart. Miles Evans-Branagh lays the foundation from which this ballad blooms with an organ arrangement that sighs and stirs, echoing an emotive vocal performance by Chris Medhurst.

I WON’T
The twangy ring of guitars brings an element of country to I Won’t, featuring Toronto legend Michael Eckert on pedal steel. Lush harmonies abound, supporting a flourishing chorus drawing the listener into a mind plagued by second guessing and self-uncertainty. An unexpected bridge bends the ear, insisting you give a damn.

DEADLINES
Demanding attention from the first note, the force of Deadlines is undeniable. Enthusiastic performances from each member combine for the ultimate trifecta: an uplifting, feel-good summer chorus, psychedelic bridge, and groove that will have even the most reserved of listeners stirring up the dance floor like a swizzle stick. A searing guitar solo by Ben Healey keeps the energy sky high, reminding listeners this is, primarily, a rock and roll album.

HANGIN’ ON AGAIN
Worth every second of its 7:06 spin length, Hangin’ On Again is the magnum opus of the album. Telling a timeless tale of love and loss, the lead vocals dance the delicate line between tasteful and untamed with exquisite precision. The arrangement inflates from the onset with atmospheric guitar courtesy of Ross Hayes Citrullo, and organ before bursting into a fervent chorus highlighting The Commoners as masters of their craft.

ALIVE
Concluding the album, The Commoners extend a final invitation into their sacred heart space with Alive. Bassist Ben Spiller lends his prowess to the piano, aligning with Michael Eckert’s pedal steel for a mesmerizing outcome. Alive calls into question the value we assign to that which is important to us in life. How are we to weigh a dream against daily responsibilities, and conjure belief from a well that easily runs dry? An unforgettable ending to an incredible journey.

All songs written by The Commoners
Produced by Ross Hayes Citrullo and The Commoners
Executive Producer - Renan Yildizdogan
Recorded at RHC Music, Toronto ON