Steve Hill, the acclaimed singer-songwriter celebrates his 25th year as a recording artist with this release. Three years in the making, the album is, without a doubt, a step up for the artist, both in terms of maturity and execution, and his best production to date.

His new album Dear Illusion is set for worldwide release via No Label Records on Friday November 11, 2022. The album is available worldwide from https://ffm.to/dearillusion.

The first single taken from the album, Everything You Got, released Friday September 23rd, is available to stream/download via https://ffm.to/sheyg.

The new single is accompanied by a music video which can be viewed on YouTube from Wednesday September 21st:

Steve Hill - Everything You Got (Official Music Video)

"I had a version finished right before the pandemic started,” says Steve. “It was slated for release in April 2020. There was no point in releasing it then, so I decided to wait. The sad context of the pandemic resulted in additional time for me to offer my fans the album I’m sure will meet their expectations for my 25th anniversary as a recording artist. I am proud of the work."

"Ultimately, the results that we collectively achieved with the album, ended up reflecting both maturity and introspection. Overall, I feel like the album is telling that no matter what happens, you should give it everything you got and move on, be the best person you can be, and no matter what, the sun will rise again. Don’t dwell on suffering, and don’t forget about it, either. Even treat misfortune as a friend, slap it on the back and say, Thanks for teaching me.”

All About The Love
Music by S. Hill, Lyrics by J. Parlett, S. Hill
This one is a mash-up of styles and recordings as the verses were recorded in France and the rest of the song comes from a version I 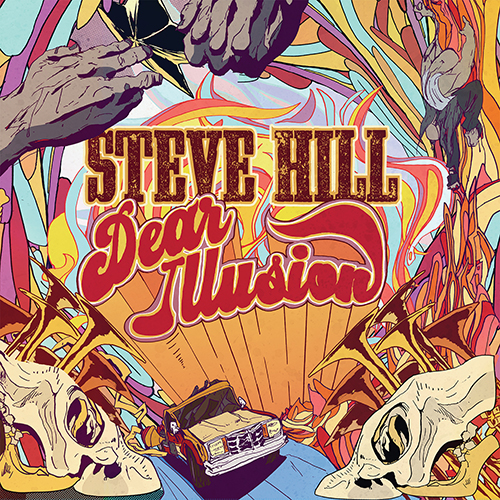 recorded at home. Lots of unique styles are mixed together. One of three songs played as a one-man band on the album, with two different horn sections from two continents!

Keep It Together
Music by S. Hill, Lyrics by J. Pilgrim, S. Hill
Wrote the music on harmonica, which doesnʼt happen often. I hate to explain or analyse my songs but this one, to me, now sounds like it is about Covid and trying to deal with it and the aftermath. The way it was written is another story. I asked my friend and writing partner Johnny Pilgrim to send me synonyms of Feeling Good. He sent a bunch, and I made the verses out of those and came up with the rest of the song the very same day, as I was recording the demo. I had no idea what it was about at the time. The vocal on the album was recorded on that day, as well as the harmonica, guitars, and bass.

Everything You Got
Music and Lyrics by S. Hill
Just a positive song. You get what you give. Simple message but always true and you can never hear it too often. I like that it has a lot of riffs even before the vocals kick in. Killer groove by Wayne Proctor on this one. There are two different guitars exchanging lines in the solo, a 55 Les Paul Jr and my old 66 Tele.

Dear Illusion
Music by S. Hill, Lyrics by J. Parlett, S. Hill
I'd had the verse’s melody and chords for a while when I finally wrote that one, with the help of my long-time lyric collaborator Joshua Parlett. I was heartbroken like never before when we wrote it, and it came easily. Itʼs about realising that the person you are in love with is not what she was pretending to be and coming up with the terms that you were in love with an illusion, as this person never really existed.