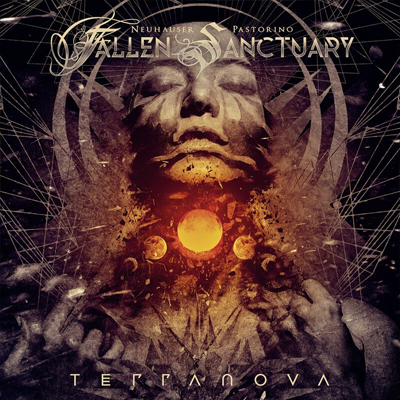 Billed as Melodic Power Metal, ‘Terranova’ indisputably does what it says on the tin. It’s uncompromisingly heavy and melodic throughout; too heavy, perhaps, to be considered AOR, but melodic enough to keep the Metal Gods of speed and thunder in check. Neuhauser’s vocals are super-smooth and ultra-classy, but somehow mesh perfectly with the often-furious metallic maelstrom kicked up by Pastorino and the outstanding rhythm section of drummer Alfonso Mocerino and bassist Gabriele Gozzi. Inspiration is drawn from across the Metal and AOR spectrum, and the overall result is a full-on, energetic, multi-layered sound that clearly transcends both stylistic and personal influences. It delivers a masterclass in joyous virtuosity.

While ‘Terranova’ offers a strong and consistent set of songs, there are stand-out moments (each to their own). ‘To The Top’ is Journey on Red Bull, with the band’s natural inclinations to take the roof off beautifully controlled; it’s got “Hair Metal single” written all over it – a touch ironic, if you’ve seen the band shots! ‘Destiny’ oozes energy and self-belief with Mocerino’s big bass drum working overtime (think Rainbow circa ‘Death Alley Driver’ era). ‘Trail of Destruction’ thumps and pumps along with a dancing keyboard intro and layered chorus vocals; you’ll be whistling along to the melody, or barking at the moon with Pastorino... long before this dog has had its day.

Deserving of particular mention is the cobweb-blitzing title track, which not only stamps its mark musically on everything that follows, but, with its focus on drug addiction and it’s earnestly spoken end-piece, amply demonstrates the band’s “relevant and socio-critical” approach to lyric writing. This is also evident in ‘Rise Against The World’, ‘Now And Forever’ and ‘No Rebirth’, all of which deal with aspects of, what sometimes feels like, an unstoppable march towards environmental destruction. “It’s high time we got it into our heads that there’s no Planet B to fall back on”, says Neuhauser.

For me, it’s always great to see and hear Rock and Metal bands getting with the zeitgeist of the times. Power (Metal) to the people!

Ina Forsman - 'All There Is'