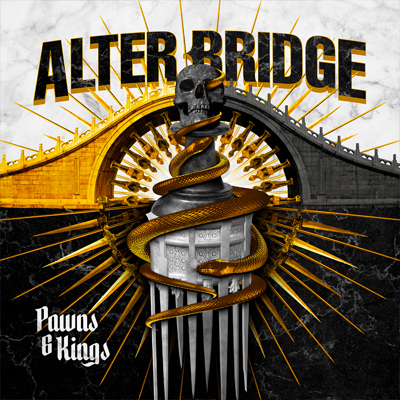 The global pandemic may well have disrupted live performances around the world; however, it has allowed songwriters to get busy, and boy are we reaping the benefits of that right now. Mark Tremonti and Myles Kennedy of Alter Bridge have been prolific, both recently releasing fabulous solo records. However, that doesn’t mean that they have abandoned their band mates in the slightest.

The Orlando-based rockers will release their seventh studio album ‘Pawns And Kings’ in October, following on from their 2019 offering ‘Walk The Sky’. Kennedy (vocals/guitar) and Tremonti (vocals/guitar) are joined yet again by Brian Marshall (bass) and Scott Phillips (drums). They worked once again with their long-standing producer Michael “Elvis” Baskette. Their eighteenth year in existence is going to be a wonderful one for them. They will be promoting this opus by touring extensively at the end of 2022; you simply cannot afford to miss them.

Hold on to your hats, as you about to be hit by a full-on, hurricane force Heavy Metal guitar attack. Kennedy is really pushing Tremonti hard on the guitar front, and it will be amazing to see them battle it out on stage. These ten songs make up their most aggressive offering to date; three of which are well over six-minute-long epic anthems.

The opener ‘This Is War’ sets the scene for the whole album, with a heavy rhythm section leading the way and taking us into battle. ‘Dead Among The Living’ and ‘Holiday’ both feature powerful doom laden riffs; the latter tune sounds more like the description of a Viking battlefield. The second single, ‘Silver Tongue’, is an interesting story about a painting that comes alive, as the two characters struggle between good and evil.

Tremonti takes over lead singing duties on the punchy ballad ‘Stay’, whereas Kennedy displays his full vocal dexterity on the eight-and-a-half-minute classic ‘Fable Of The Silent Son’; this simply must be a live feature in all future Alter Bridge gigs. The title track closes out the opus in monstrously powerful fashion.

This release will give the band new fans, due to the powerhouse and intense duelling twin guitar attack. Tremonti is quoted on Blabbermouth, “I think if you are a fan of Alter Bridge, you’ll dig this record”. I simply cannot sum it up any better than that.